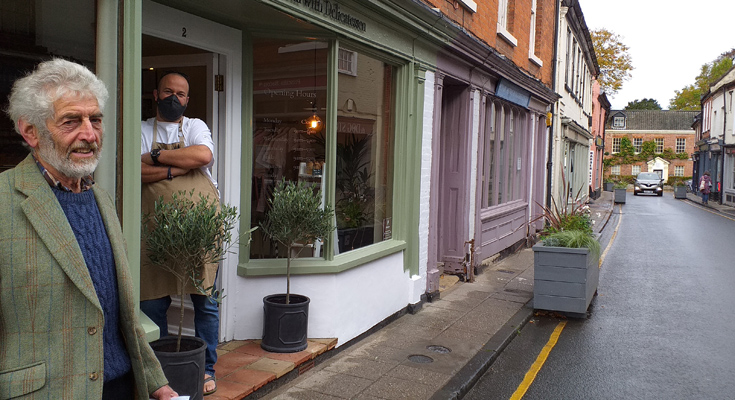 Geoff Harvey had to smile. It had been 12 years since he closed the door of his Red Lion Street bakery-delicatessen for the last time, after selling homemade bread in the town for 32 years.

Now, after a series of different roles, his old shop had been transformed into a modern cheese room and deli – but has kept all the original rustic features which had made it so popular back in the ’70s and ’80s.

“I’m carrying on where Geoff left off,” said Charlie. “But in a different guise. Geoff broke new ground when he opened his shop and I’m hoping to continue that tradition by bringing together all my favourite foodie and culinary items under one roof.”

Geoff, a former lorry driver, taught himself to bake so that he didn’t have to travel all over the country after he married his wife Gillie.

They spent two years selling bread and cakes from a market stall in Aylsham before taking on the shop in 1973. His bread attracted customers from far afield, with second-home owners stocking up on loaves to fill their freezers back in London.

“We hit it right,” says Geoff. “It was a time of bread strikes, hippies coming to local music festivals wanting stuff like dried fruits and pulses, and wealthier people began to move in to Aylsham.

“That was when we introduced our home-cooked ham, cheeses and quinoa – much before it became fashionable. We never looked back.”

Sadly, Gillie died in 2008 and Geoff retired to grow organic vegetables and keep chickens at their home in Banningham.

For Charlie Hodson, the shop is the culmination of a long desire to run a shop. “It has that traditional English charm, large windows, creaky floorboards, shelves full of my favourite things and that smell of freshly baked rolls of pork filling that simply encapsulates the foodie soul. “

So why Aylsham? “It’s always felt like home,” says Charlie. “I have many friends here and with Aylsham in the heart of Norfolk farming land and the porky home of our ‘Big Norfolk Sausage Bash’, it just felt right.

“When I walked over the threshold of the shop door, with that creek of the floorboard and after ten seconds of walking around I knew this was it. I had found the home for Hodson & Co. Not simply a shop but a way to give back to all those amazing producers who have supported me as a chef and local food champion over the years. “

When Geoff bought the premises, it was a greengrocers which, in turn, became a shop selling chocolates (what is now Carousel), a dress shop and tanning salon.

“I wish Charlie well,” said Geoff. “It’s a great idea and I’m delighted if surprised he could get all those Norfolk cheeses. I shall be calling in again.”

As will Aylsham residents Mary Newton and Lisa Overton.

And Lisa added: “I’m delighted to see it open as a food shop again. It’s just what Aylsham needs.”