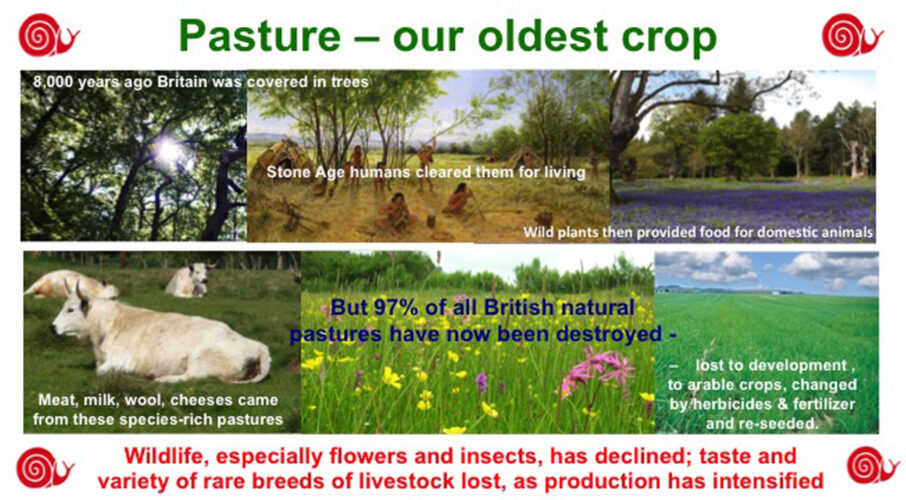 Pastures have been important to Aylsham for hundreds of years – the town was the centre of the medieval wool trade, through the ports that once did a thriving business along the Norfolk coast trading with Europe.

Our churches, like Aylsham and Cawston, bear witness to that past wealth, based on pastures.

They were an unplanned consequence of forest clearance by Stone Age man more than 5,000 years ago, but became ideal for grazing the newly-domesticated livestock.  Right up until the middle of the 20th Century, pastures – with their unique combination of grasses and flowering plants, dependent on the geology and soils – were responsible for this country’s natural (plants and animals) and domesticated (livestock) biodiversity.

All began to change with the Second World War (1939-45) when many permanent pastures were ploughed up to grow crops for the war effort.

After the war, many on the outskirts of towns and cities were lost to housing development and throughout the country many more were lost to ploughing and re-seeding with ryegrass, or treatment with fertilisers and herbicides to encourage greater grass growth at the expense of the flowering (broad leaved) plants.

Today, 97 per cent of our pre-war pastures have disappeared and with them populations of flowering plants, insects, birds and rare breeds of livestock.  Our modern society has lost the unique and local taste quality that true pasture-fed livestock can give us through their meat or milk or cheeses, sacrificing it for the bland, cheaper, “identikit” versions in supermarkets all over the country.

Many of the best examples of the remaining pastures are in the care of conservation organisations, such as the Norfolk Wildlife Trust, National Trust or RSPB, or farmers with wider vision – farmers like those at Bure Valley Farm, Aylsham; Hawthorn Farm, Stody; Dole Farm, Hevingham; Bainbridge Park Farm, Blickling; Norton’s Dairy, Frettenham; and many more.

It is ironic that, while natural woodland is rare because of its early clearance for pastures, natural, permanent pastures are now rarer because of their short-term destruction for quantity at the expense of quality.