A salute to fantastic foodie friends

The three-day Aylsham Food Festival bounced back to its traditional calendar slot in October 2021 after a two-year Covid-induced absence.

And it was a celebration of the community fellowship that saw the town come together to help those in need during the dark days of the pandemic.

Hundreds of townsfolk attended the various events – the Gala Dinner in the High School, both Farmers’ and Country Markets, wine tasting and the Sunday Brunch.

But it was the support of scores of school teachers, students, chefs, catering helpers, local businesses and market traders, as well as food producers and suppliers and even non-food outlets and artisans who helped make the event possible.

These were the people who delivered the goods to Aylsham residents through the dark times when supermarkets struggled, providing a supply line of local produce, special doorstep deliveries, and catering for those unable or frightened to get out.

“It’s fair to say that many in the town became increasingly aware of the benefits of staying local – neighbourliness, enjoying our open spaces and caring for the environment, buying more from local traders, especially after panic buying left supermarket shelves empty, said Patrick Prekopp, chair of Slow Food Aylsham.

“As a result, they are now more knowledgeable about what they’re eating and dietary issues and are taking much more interest in what they’re buying, how they’re cooking it and, of course, the value of their local shops.”

This was highlighted when, having faced so many challenges over the last 18 months, Aylsham High School, who were hosting the Gala Dinner, was suddenly confronted with potentially serious last-minute difficulties with the gas crisis, food shortages, distribution problems and supply chain delays.

By sticking with locally sourced produce, however, the near-50 staff, chefs and students were able to prepare and serve a delicious four-course meal to nearly 100 guests.

“Executive Headteacher at the High School, Duncan Spalding is an enlightened head. His is one of the few high schools which devotes much energy and resources into educating young people in food and nutrition,” said Patrick.

“Ultra-processed food is blamed for the growing obesity problem in children – and it’s only by teaching awareness of good, healthy food and how to cook it that the next generation stands a chance of avoiding the serious health problems we see today.”

So the future is in good hands – Slow Food Aylsham and Cittaslow salute them all. 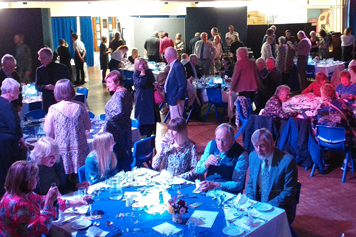 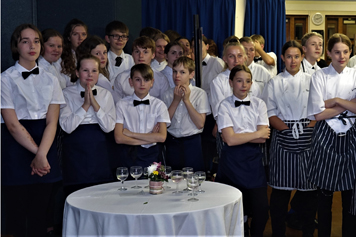 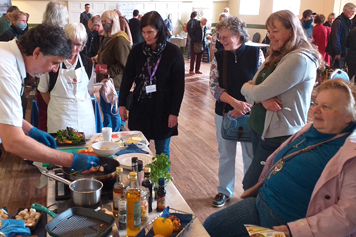 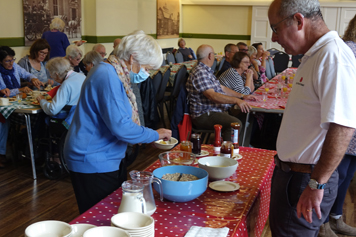 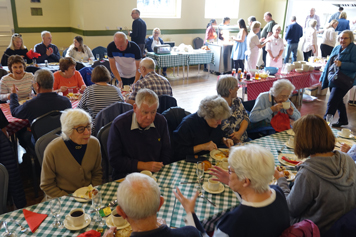 Slow Food Aylsham would like to thank the following for their support and generosity:

• This year Slow Food Aylsham was delighted to welcome the cast of Joseph and the Amazing Technicolour Dreamcoat who performed a selection of songs from the show. Festival showcase for hit musical

Chefs, cooks and other culinary capers

Chefs – big and small – took centre stage at the Aylsham Food Festival 2019. As guest speakers, and in the kitchen, demonstrating cookery skills or juggling in the square, they were everywhere.

They were taking part in the 14th annual three-day event in the Market Place and Town Hall at Aylsham, held to celebrate all that is good about local food supplied by local producers.

Organised by Slow Food Aylsham and Cittaslow Aylsham, the festival attracted a wide range of interest from near and far, many booking tickets for the Festival Dinner at Aylsham High School and a fry-up at the Big Sunday Brunch in the Town Hall while shoppers at the Saturday Farmers’ Market were delighted with the Culinary Capers of the “juggling chef”.

The traditional event is always held on the first weekend of October coinciding with the Farmers’ Market, the end of the harvest and apple picking.

Local cider maker David Warren and his daughter Rosie kicked off the festival the week before with a demonstration of apple crushing and cider tasting.

But the main event was “An Evening with Charlie Hodson and Steve Thorpe” at the festival supper in the High School. Both are first class Norfolk chefs and champions of keeping it local and old friends of Slow Food.

After the meal of venison chilli with rice or flatbread, salsa, guacamole, and apple three-ways for dessert, all prepared, cooked and served by the High School catering students, the guest speakers spoke of their confidence in the future of Norfolk’s hospitality business despite the changing nature of the food industry, the collapse of restaurants and the impact of what we eat on the environment.

Charlie Hodson told the 80 diners that the quality of cooking and enthusiasm shown by the students was inspirational and that “we are in safe hands” with the next generation of foodies.

The extended Farmers’ Market was particularly successful and many stalls sold out as shoppers were treated to some street entertainment by “juggling chef” Ian Marchant.

In the Town Hall, local chef Derrol Waller gave a demonstration of what you can do with just £10 and ingredients bought from the market. His warm Norfolk Dapple, celery and garlic mustard salad – with croutons – went down well with his audience.

As did the fried sausage and pork, followed by an apple and pear dessert.

And, despite the torrential rain on the Sunday, about 70 residents, including a significant contingent from St Michael’s Church, sat down for the Big Brunch prepared and served by Slow Food members and friends.

SFA chair Patrick Prekopp said: “This year’s festival was probably one of our best in recent years and proof that
the community spirit and food awareness in the town is alive and well.”