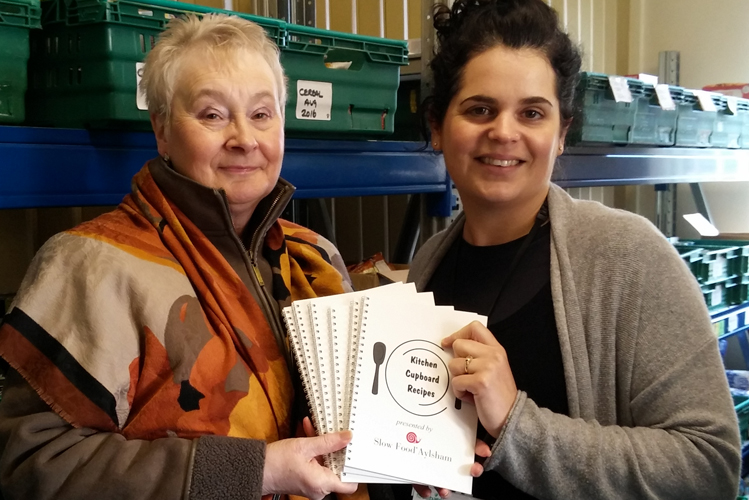 Kitchen-friendly recipe booklets produced by Slow Food Aylsham to help people using food banks attracted national interest in 2016 and were among the highlights of the group’s activities over the year.

Produced and tested by members together with local chef Derrol Waller, the wipe-clean, ‘open-flat’ books were donated to Cromer and District food bank.
Among other activities, the group was also involved with speaking engagements at the Women’s Institute, International Women’s Day, Family Learning Day at Aylsham High School, the Aylsham Show and, of course, the Food Festival.

2.1 Mo Anderson-Dungar outlined the SFA’s activities during the year making specific reference to:

2.2 Mo extended her thanks to the group’s membership for their continuing support and, specifically, to Shelley for her input to the WI and IWD events, to Jill for her leadership on catering events , to Giles for his tireless assistance with the staging of events and to Maureen, Roger and Richard for their support with the management of the group.

3.1 In Maureen Burr’s absence Mo presented the financial report which showed that overall expenditure in 2016 at £4,719 had exceeded income by £107 and that the balance at the year’s end stood at £4,985.

3.2 The report noted that the income had included a grant of £1,000 from Broadland District Council and a donation of £300 from Woodfordes.

4.1 In the absence of a nomination for Chair and Vice-Chair it was proposed by Roger and seconded by Mo and agreed that these positions be filled on a meeting-by-meeting basis.

4.2 David Harper was appointed secretary having been nominated by Roger and seconded by Geoff.

4.3 It was confirmed that Maureen Burr would continue as treasurer.

4.4 Outgoing Chair and Vice-Chair, Mo and Richard, were thanked for their sustained input during what had been a challenging year for them personally.

5.1 Roger reported that changes to the AHS curriculum may make it impractical for the school to host the Food Festival Gala Dinner in 2017. In previous year’s this has been a key feature of SFA’s activity. In the circumstances he proposed, and it was agreed, that when the group next meets it should give consideration to SFA’s future activities.